Mark Livingstone, SLN2010, made the move to London from New Zealand to pursue a Sloan Masters at LBS and a career in consulting. He drew on his background working in the energy industry to secure his current role as Director at Navigant, after developing his freelance offering in the UK. Mark speaks to us about leveraging the Sloan to transition both location and role. 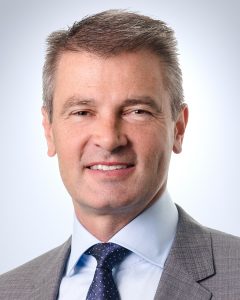 What were you doing (and where) before you came to LBS? Tell us your story.

In 2009, I was living and working in New Zealand, near Wellington; I’d been there since the 80s, so 20+ years being based there.

What was the initial reason you decided to pursue a Sloan Masters in Leadership & Strategy?

I’d decided to move into a consultant role, and really I came to London because I wanted to be much better at it – more qualified, with a more global perspective. I knew I wanted to study to get that global perspective and initially I looked at Stanford’s Sloan programme but the costs and the logistics of my wife and I working there just didn’t make sense. I found the Sloan at London Business School and it just all came together.

Where are you now?

I’m now a Director at Navigant, a global consultant company. I work with large energy company clients both in the UK and internationally. I’m based in London and it’s very much about working with new energies, low-carbon futures – a lot of companies are going through major changes at the moment. In terms of how I got here, I initially went freelance for about a year and a half after my degree – I needed to prove myself in the UK market. Off the back of that, I joined PA Consulting, where I was for three years before joining Navigant about four years ago.

What helped secure your current role?

I got quite a few referrals from other Sloans, which definitely helped me meet new people. One person I met had worked at Bain and it was great to have his insights into making the move from industry to consulting. The Sloan gave me a better understanding of finance, of strategy and of global business, so that also helped me be more convincing to employers. I also did Derek Bunn’s energy markets course, and the projects I did as part of that gave me the credibility to secure my freelance contracts.

Networking is such an important element for Sloans in particular; it’s a reality that when you arrive in London if you’re from other places, you’re often not that well known. You may have gone to a good university in your home country, worked at established companies, but people here won’t know about that. It is a bit of a reality check that you’ll probably need to re-gear your network. I was proactive from day one, I met with my Career Coach early in my year at LBS to understand how to start, what to do. I think it’s important to not expect too much from people you’re connected to; if you meet them for coffee and they can give you a couple of referrals and some insight, that’s great. You’re not just asking for a job. So I think there is a degree of expectation management around how you network, and the reality of almost starting from scratch again. I often say to people, networking is about finding a style that you enjoy – maybe that’s not big industry conferences, maybe one-on-ones suit you better. Find a way that works for you, and start early – quite a few of my classmates left it until the third term once they had more time, but really that’s too late.

What challenges/barriers did you face in finding and securing your role?

I’d been freelance in New Zealand so it was an option when I arrived, but I was interviewing with consulting firms, and we had numerous meetings. I actually interviewed seven times with one company, and they really wanted to hire me – but I didn’t have the track record of selling in the UK market. It was a bit of a surprise and a disappointment, but the honest reality was that because I wasn’t experienced in the UK and I didn’t have a large network, they just weren’t prepared to offer me a senior role. I’d interviewed with a lot of people but I realized those doors were literally closed until I had the right background. I then had an opportunity to join GE but again, it wasn’t quite senior enough for me to really want it. So, I used my contacts and got a freelance contract instead – and I was happy to do that because it was continuing in what I knew and loved, just in a new market.

Sometimes it can be easy to try and leave behind too much in your career change as a Sloan; it’s important to understand the hooks in your own experience, what might make you marketable in the UK. For example, I’ve worked in areas like smart metering so I picked up those tangible things as part of my ‘here’s why you might want to talk to me’ script. Don’t reject your background totally – use what’s going to be relevant in your target market.

Can you give one example of where it all went horribly wrong – what happened? What did you do/learn? In other words, your ‘best worst day’.

After the seven interviews with one firm, I’d say I was pretty optimistic! I was invited to the final round with a really senior person, and afterwards they told me that they liked me, but they weren’t going to offer me the position. I was frustrated that they couldn’t see past the obvious, that I hadn’t lived here all my life. But the good side was that the door closed definitively on that, and I knew that if they didn’t want me I had other options. At the time I was really deflated and drained, but now I look back and think maybe if I’d gotten that role, their expectations would have been hard to meet in a brand new market after all.

What personal and/or professional compromises did you make in order to make this change?

My wife has an English grandmother, which gave her the ability to work in London, but it wasn’t easy! As a freelance consultant herself she had to fight for about six months until she landed a decent contract, which was all through networking and referrals. There were also financial compromises; she had to start at a lower level of income. On a personal point, all our family are still in New Zealand, which is a long and expensive flight! But we love living in London, the global environment – people often ask why we chose London over New Zealand, but here it feels like you’re the centre of the business world. Even though New Zealand an amazing place, in a work context, London is fantastic.

One key piece of advice you would offer fellow Sloan students looking to emulate a similar journey
Consider what you’d like to change, but perhaps make one change at a time. It’s not impossible to make the ‘triple jump’ of location, industry and role, but it is incredibly difficult. Don’t disavow your professional past but look at what’s positive and how you can build on that to keep some continuity with what you know.